I feel the most common mistake couples who have been together for a while make is that they start to take each other for granted. You're together more than two years and you feel you know everything you need to know about each other, you have already done "enough" romantic things for each other. courtship period isn't what love is about... its what come after....

I've been with my husband for two wedded years and five dating years... and even today we make sure we don't take each other for granted. Small things like if i make a god meal, he will always compliment it. If he comes home early from work to be with me i will show him that i appreciate it. We go for our coffee dates where no friends are allowed.

When we got married, it was mainly because it was the best option since he was shifting cities and we both knew long distance was not something either of us could handle. So before we knew it the wedding plans were already underway. There was no asking no proposing nothing!

But two days before the wedding he surprised me with the most fantastic wedding proposal ever!!! I'm going to put up those images soon.... just need to sort them out first!!!

His proposal meant the world to me... it was him actually saying "Even though our entire wedding is planned out and ready to go in two days, I still want to "ask" you if you want to be with me" and it felt so so good!!!! To know that it was as important to him as it was to me that we don't just make assumptions for each other!!


So when I found this amazing proposal i just had to share it....

It all started with this simple image: 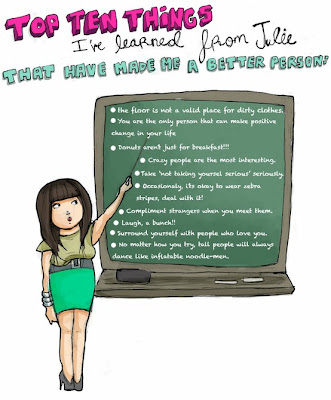 And i said to myself... hmmmm is this written by a guy?!!! the link added to my curiosity!
http://juliewillyoumarry.me/
The entire site is a proposal... and please watch the video of the girl seeing it!!! oh so beautiful.... they too seem like they have gone thru much together and for him to take out so much time and effort and to make this.... it just reaffirms that love is really something else!!!!!
Posted by alishka-the diy mommy!!! at 03:16